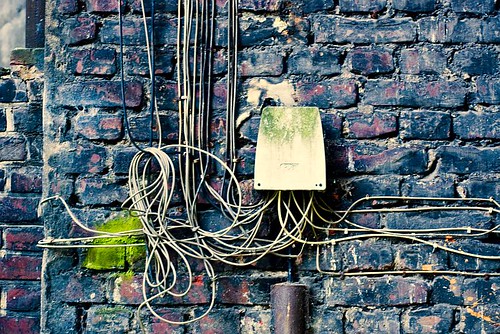 Organizing a PLN is a kind of continual chase. I try just about everything if I have heard of it. I am always investigating tools to see what they do, if I will like them, how they might make things easier or a better experience.

If I just focus on Twitter, there is a constellation of Twitter apps that I tend to use. I like Tweetdeck for certain kinds of tasks. For instance, if I am at an event and live tweeting Tweetdeck is definitely a tool of choice. I like to keep those streams flowing fast.

Sometimes, I may even have a separate tab open with a single Twitter open if I want to track something like a separate tag or person and keep the flow slow and manageable. It all kind of depends on the need or specific use.

I also like to occasionally use Storify to assemble streams of tweets for a specific event in a more formal, presentational way, whether I am physically present at an event or not.

For managing multiple accounts, something  I do lot less than I once did, I like HootSuite more. I also like to keep fewer streams moving slower in HootSuite. It just seems to work best that way. I particularly like the AutoScheduling feature and wish I used it more. Yet, I tend to use the constellation of Twitter tools more on the hoof. So I don’t spend an immense amount of time strategically planning a lot of tweets, although I have tinkered about with it occasionally.

Yet, I tend to use Twitter and associated tools more on the hoof. So I don’t spend an immense amount of time strategically planning a lot of tweets, although I have tinkered about with it occasionally.

I have used Buffer to schedule tweets too but have never latched onto it with the same interest as some of these other tools mentioned.

I have been using Pocket for a couple of years now and like it. I tend to use it most in conjunction with Twitter. I have to admit though that I do not go back to a lot of things I mark in Pocket as much as I ever thought I would. Instead, it becomes a bit like a filtered database of material that I might search, a bit like Diigo or Delicious. I still use those too.

I will also mention Itsy. It is a downloadable Twitter app that runs locally and is visually very simple and clean. I like the look of it more than anything. Sometimes, I will keep it open along the left side of my desktop, alongside other windows I have open and doing other things. It blends in nicely and allows me to monitor Twitter loosely without it being quite as distracting.

Actually, I like to use different tools for different purposes. I tend to favor a set of simpler tools that do one or two things elegantly over a single one that tries to do everything. Plus, I periodically tinker around with a handful of recipes in IFTT tweaking how I track, collect, and share resources. It is a never ending process, for me. I try to take time to just play occasionally.

Periodically, I tinker around with a handful of recipes in IFTT, tweaking how I track, collect, and share resources. For example, if I save something to Pocket I automatically tweet it. Messing about with PLN organization and using a tool loke IFTT is a never ending process, for me. I try to make time to just play occasionally.

Use these guiding questions as you consider how you contributed to the learning of others:

I have not been the best sharer of curated sources for this course, thus far. However, I suspect that may change in the coming weeks. There are a few projects that I might be able to offer assistance by sharing some known resources. So I suspect that I may be adding tot he Diigo group. Apart from the articles included in my annotated bibliography, I don’t believe I shared a lot of other resources. I have had my hands full trying to pursue my own line of inquiry.

Still, I have been trying to continue to model different ways of archiving a lot of the Twitter chatter associated with class.  I do think that more frequent Twitter updates of the SEACCR Tweeted Times newspaper that I created a couple of weeks ago, from the list I created, might be useful. It is a much cleaner way to read the latest activity from the course. Plus, assigns a ranking of top tweets, based in part on retweeting. I have now automated a tweet promoting the page of collected #SEACCR tweets to be published daily at 4:00 PM Alaskan Time. This should anticipate our weekly Twitter chats, which is an active period for fellow classmates. I may need to adjust the time. That is another item on which I need to solicit some feedback.

I am not sure how much use others will find the Tweeted Times paper, but it is more an experiment. I will try to solicit some more feedback in the next Twitter chat. I think not publishing regular updates very likely left it a forgotten resource by many. Plus, it may have been just a bit too much for anyone new to Twitter. However, by now most of the participants have been tweeting with much greater regularity.

It is pretty difficult to discern the impact I have made by participating in this course and community. I like to think that I am having some, but I am definitely removed from the Alaskan cohort, no matter how much I might try to stay connected.

In some ways, I have had to begin burrowing in my own head a bit more, as I suspect many other participants, trying to fashion a path that I will begin to take for my own inquiry. Narrowing and focusing a question, while investigating what is already out there in the research community is time consuming. Focusing on my own concerns necessarily cuts into the time for sharing, exchanging, and engaging with the community. Similarly, contributions from others become less visible and harder to track. Again, as everyone begins to emerge with a clearer vision of what they are pursuing and where they are headed, I imagine opportunities will arise where a greater impact can be made.

One area that I continue to try and make an impact is through commenting and encouraging colleagues by reading and responding to their blog posts. I have also been tweeting when I comment, in hopes of encouraging others to read and comment on those posts as well. I am not sure that it is working, but it also serves as a record of my own activity for myself, which has been useful. That is a tip I would encourage others to consider doing too.

It is really interesting and informative to read others’ blogposts. Of course there is the benefit of reading about their evolving project, which should reassure anyone that they are not alone. Yet, I find there is a lot to be gleaned from how individuals go about posting, including content, structure, and style. My observations make me think more about how I blog, something I have been giving a lot of thought for the last few months, as I have been making a concerted effort to post daily during the work week and at least once over the weekend.

Keeping with the tradition of using Storify to highlight contributions to the weekly Twitter chat, Here are a few tweets and exchanges that characterize some of my contributions and conversations from the week. Storify is proving to be a really useful tool, far more than I previously thought. It is perfect for collecting and curating Twitter activity in a narrative way, which is useful for an open course like this that leverages Twitter use by participants.

Final Thoughts from the Week that Was

Ultimately, I was able to get a good start on gathering up some research material and articles. I still hope to dig a bit deeper into the roots of peer response groups, since that is a considerable foundation for my line of inquiry. I know from reading and experience that quality peer response groups are predicated on explicit teaching and practice. It takes time to cultivate practices and habits that are beneficial. My hope is to find some additional methods and strategies to improve the groups as well as glean insights into how Google Docs might be better leveraged in the process.